ESPN’s Nate Silver went on Sportscenter this morning and revealed his favorites for the Final Four.
The prediction:
• Louisville (#4 seed, Midwest region)
• Florida (#1 seed, South region)
• Arizona (#1 seed, West region)
• Michigan State (#4 seed, East region)
These are the favorites in each region according to Silver’s statistical model.
So, will he win Warren Buffett’s Final Four Perfect Bracket billion dollar challenge or will you?

Questions:
1. Why are Warren Buffett and QuickLoans so sure that they will not have a winner?
2. Even if no one wins, what will the people with the 20 most accurate brackets receive?
3. How many entries do they expect?
4. Does it help to know something about basketball? Explain. 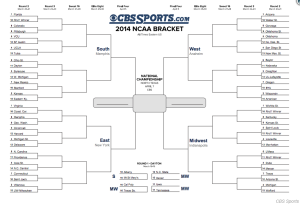