In June, the secretary of education, Betsy DeVos, announced plans to dismantle a set of Obama-era policies devised to protect students and taxpayers from predatory for-profit colleges. However, data released in the final days of the previous administration shows that the existing rules were more effective at shutting down bad college programs than even the most optimistic backers could have hoped.

Questions:
1. What rules does Ms. De Vos want to repeal?
2. What does analysis of the more than 500 failing programs identified by the Obama Administration show?
3. How would you evaluate the gainful employment test? Should they be repealed, given the evidence in the article?
For Questions 4: Consider what risks and potential frauds could be in play.
4. What do you think will happen during the two years it will take for the Department of Education to write and set into effect new gainful employment rules?
5. Is repeal without replacement a good idea? Discuss. 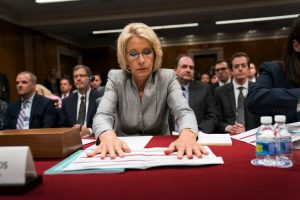