The first known shipment of cooked chicken from China reached the United States last week, after a very publicized trade deal between the Trump administration and China. But consumer groups and former food-safety officials are warning that the chicken could pose a public health risk.

Questions:
1. What are the health risks?
2. What are the problems with the labeling on the Chinese chicken?
3. What are some of the current risks to public health, noted in the article?
4. Which companies are selling the chicken?
5. What did the U.S. get out of this trade deal?
Source:
Dewey, C. (2017). The dark side of Trump’s much-hyped China trade deal: It could literally make you sick. The New York Times, July 7 (Retrievable online at https://www.washingtonpost.com/news/wonk/wp/2017/07/07/the-dark-side-of-trumps-much-hyped-china-trade-deal-it-could-literally-make-you-sick/?tid=hybrid_content_1_na&utm_term=.6bdb55b4791f) 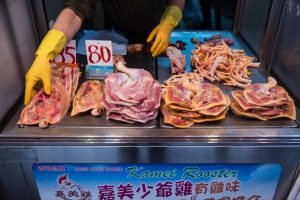