A Manhattan federal jury rejected claims by a former high-flying Wall Street executive that he was in the dark about his dad’s illegal trading of several health care mergers the banker son was privy to.

Questions:
1. What is the maximum sentence that Sean Stewart faces? What is the likely sentence?
2. What amount of money did Robert Stewart (Sean’s dad) make from the insider trades?
3. What evidence did the government counter with after Sean took the stand and told the jury that his father used him, resulting in the loss of his career and reputation?” What piece of evidence was probably most likely to have the entire jury find Sean guilty?
4. What was Robert Stewart’s (Sean’s dad) sentence? What was Robert’s role in Sean’s trial? 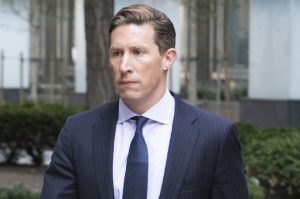