Abercrombie & Fitch’s “Look Policy” requires workers on the floor to wear “clothes, accessories and footwear that are similar in style and fit to the brand, and that are consistent with the current fashion season and colors” but that aren’t “clearly that of a competitor.”

Questions:
1. Economic historian Price V. Fishback wrote that, “The company store is one of the most reviled and misunderstood of economic institutions. In song, folktale, and union rhetoric the company store was often cast as a villain, a collector of souls through perpetual debt peonage. …The attitudes carry over into the scholarly literature, which emphasizes that the company store was a monopoly,” [thereby funneling workers’ incomes back to the wealthy owners of the company.] Does this characterize the class action suit at Abercrombie or is it about something different? Discuss.
2. How many Abercrombie & Fitch employees claim that they were illegally required to buy the company’s clothing for work?
3. How has Abercrombie’s strict employee dress code recently gotten it in other legal trouble?
4. What other practices may also get the company in trouble? 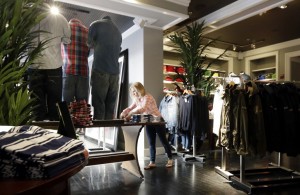