Questions:
1. Did all locations deal with the problem in the same way? What did they do?
2. Why do you think that the outage did not affect licensed stores?
3. What was the source of the glitch?
4. Do you think that Starbuck’s needs a disaster plan for each store in the event that this happens again?
5. Were you surprised that they gave away coffee? How do you think they will account for this? 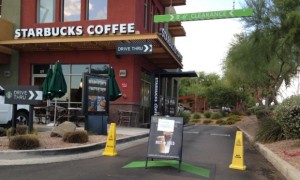