Looking at GDP reporting GDP on a quarter-on-quarter basis, it turns out that Greece’s six-year recession is over, but recovery is far from near. The country’s economy grew at a 3.2 percent annual pace in the first quarter, 1.2 percent in the second, and 2.8 percent in the most recent one. However, unemployment is 25.9%.

Questions:
1. Why have falling Greek prices for over a year now been both a cure and a disease? Explain.
2. When does the European Commission predict that Greece will be back to the economy it had in 2007?
3. What is the biggest difference between Greece’s current Great Depression as compared to the U.S. Great Depression between 1929 and 1939?

Source:
O’Brien, M. (2014). Greece’s recession is over, but its depression will be the worst in history. The Washington Post, Nov. 14 (Retrievable online at http://www.washingtonpost.com/blogs/wonkblog/wp/2014/11/14/greeces-recession-is-over-but-unemployment-is-still-25-9-percent/) 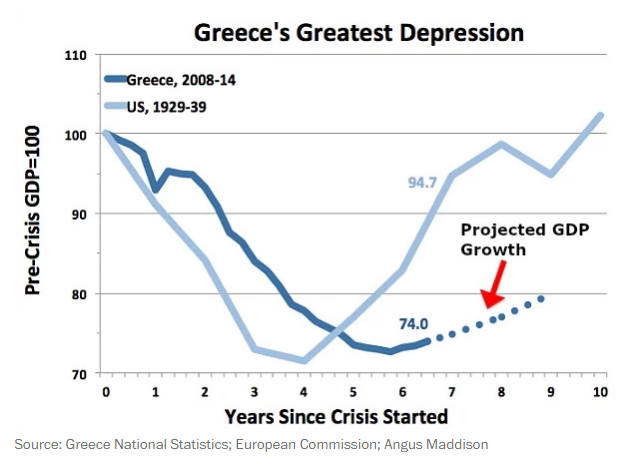