Although Guadalupe Rangel worked nearly 70 hours per week, he never saw any overtime pay at the Schneider warehouse in Mira Loma, California. As a result he joined a lawsuit involving hundreds of warehouse workers where he will likely receive more than $20,000 in back pay as part of the recent $21 million legal settlement the national trucking company.

Questions:
1. Why does David Weil, the director of the federal Labor Department’s wage and hour division, think that wage theft is increasing?
2. How much wage theft has Mr. Weil’s agency found since 2010?
3. What characteristics of wage theft did the article point to? In other words, what specific industries, states, individuals, etc. are typically affected? Discuss why.
4. Besides not paying overtime, what other wage theft practices were mentioned in the article?
5. If Mr. Rangel is not getting paid overtime, what other state and federal agencies are also being shorted as a result?

[In this Photo: Guadalupe Salazar, a McDonald’s cashier who says her paychecks were missing overtime wages.] 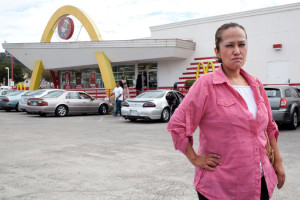