Four former leaders of the law firm, Dewey & LeBoeuf, were charged by New York prosecutors with orchestrating a nearly four-year scheme to manipulate the firm’s books during the financial crisis. In emails they talked openly about “fake income,” “accounting tricks” and their ability to fool the firm’s “clueless auditor.”

Questions:
1. Explain the role of these individuals manipulations for a private debt offering.
2. How was the case discovered?
3. At its height, how large was the firm? Who was Dewey’s auditor?
4. What was the amount of claims made against the bankrupt firm?
Source:
Goldstein, M. (2014). 4 Accused in Law Firm Fraud Ignored a Maxim: Don’t Email. The New York Times, March 6 (Retrievable online at http://dealbook.nytimes.com/2014/03/06/former-top-leaders-of-dewey-leboeuf-are-indicted/?src=me&module=Ribbon&version=origin&region=Header&action=click&contentCollection=Most%20Emailed&pgtype=article) 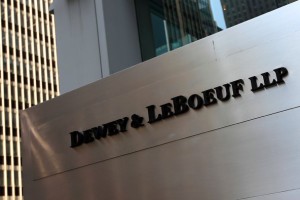