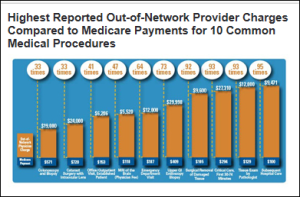 According to a new study from the Center for Policy and Research, the nation must address the soaring cost of medical care that continues to rise at an unsustainable rate. For consumers who choose to seek care out-of-network, their survey shows that the charges billed by some out-of-network providers can exceed several hundred or several thousand percent of what Medicare would reimburse for the same service in the same area. In a new expose by The New York Times, reporter Roni Rabin submits that the industry suggests using Medicare rates as a benchmark will only lead to patients’ picking up much more of the cost for out-of-network care, whether they carefully select a specialist or have no choice in the matter.

Questions:
1. What is the Affordable Care Act?
2. Do you think the problem with out-of-network providers will become better or worse with the implementation of this Act? Discuss.
3. Why do you think that many of the highest billers were in New York, Texas, Florida and New Jersey? Present your reasons.
4. Take the examples listed in the Rabin article and calculate the percentages above Medicare reimbursement. Which medical procedure example has the highest percentage above Medicare?